Welcome to our street connecting story

Bringing community to your doorstep’ begins to tell the story of our street events, and the role they play in community building here in Firs and Bromford. This summer we have done 5 more street events, and they have all been wonderful. Activities and conversations have given neighbours the opportunity to show up, feel part of their community, make new connections, and be encouraged to turn what might have been invisible skills and passions into visible skills and passions that could be shared with others. As the Street Connector Mentor (a community animator (Cormac Russell blog post on recruiting a Community Animator) each event left me continuing to realise why we put so much emphasis on finding and supporting natural connectors, and why we ask them to be hosts of a street event in their block (about 100 to 200 houses).

Previously we introduced the role of the street event host:

“Street events happen through unearthing ‘hosts’ who are natural connectors, who know lot’s of their neighbours, are deeply passionate about bringing people together, and making people feel welcomed and included in our community. This is the first crucial step and we don’t plan a street event unless there is at least one local host. This is because they are not about doing street events ‘for’ people, we do street events ‘with’ people, with a hope these events will become a regular pattern of activity in our community led ‘by’ local people.” From ‘Bringing community to your doorstep’

Street events have quickly become significant and important events in our community because for so many people they are the first place they ‘show up’, and so many exciting connections, friendships, and new community activities trace their beginnings to an encounter at a street event. Hosts play a crucial role in creating the environment so this happens by being welcomers, listeners, being attentive to those on the edges who are maybe feeling nervous or anxious. They knocks neighbours doors to invite them to the event. At the event they offer a cuppa when people arrive, cook food so that everyone can eat together, and chat to people to find out what they are interested in, not to be nosey, but to find that connection that could become a friendship, and unearth what might be invisible skills and passions to become visible skills and passions that could be shared with others.

Over the summer what has become clear is the hosts aren’t just about creating a successful event. Their role, no their calling, is way bigger than one event because they are crucial to nurturing a good life in our neighbourhood. Our hosts model what we might call ‘neighbourliness’, and we need to recognise this, celebrate it, and most importantly learn from our hosts how to be better neighbours, and cultivate a better community, and also why every neighbourhood needs to seek out their hosts, and support, nurture, equip, and celebrate them. 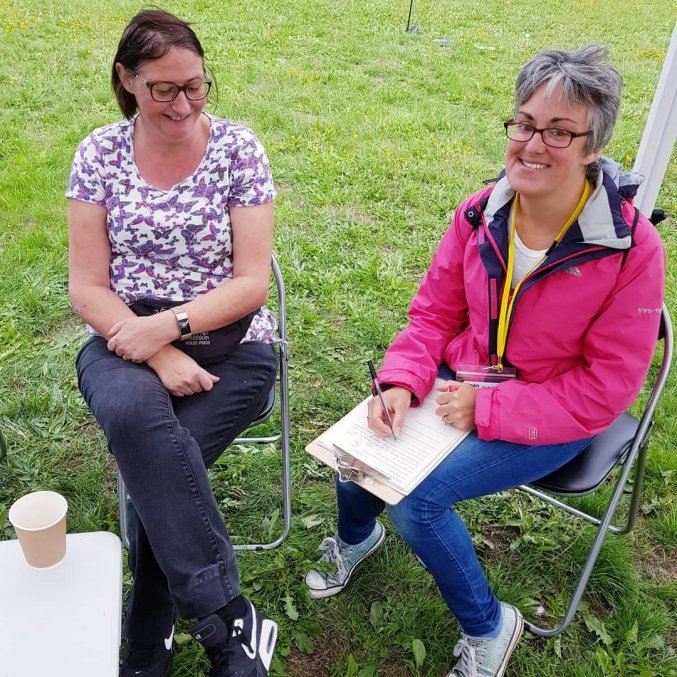 All our street events start with door knocking, inviting people to come along. What we have learned is this is a crucial step because it creates the first encounter between neighbours. It provides a face and a name to the people hosting the event, and most importantly it starts neighbours getting to know each other better.

“When a conversation starts with ‘Hi I’m Tracey, I live over the road, and I’m helping to host a street event next week. I would love you to come along.’ this becomes a much more significant conversation than just promoting a street event. It’s a step towards bringing people together, building connections, creating a culture of welcome, and building trust.” From ‘Bringing community to your doorstep’

This summer, one of our doorstep conversations started with a bit of a chat about the garden. The garden was a wonderful array of different ornaments and furniture which got us happily chatting, before we moved onto the invite to the event. The response we received was slightly unexpected; ‘you wont believe this, but I really suffer with anxiety and I wouldn’t be able to bring myself to come over to the event. Even though I can tell you are lovely people and it would be a lovely event, I just wouldn’t be able to come, sorry!’. I knew at that moment the next few minutes were going to be why we do what we do. One of the connectors, softly but with such honesty and courage in her voice, replied ‘You’re not going to be believe this, but I struggle with anxiety as well. I didn’t want to come out today to be here but I have because I know this is what I need, this brings me life and helps me deal with my anxiety’. What happened next was a conversation between two neighbours being real and honest with each other. We left feeling optimistic that she would come along next week, which incidentally she did come for a cuppa, but I knew more significantly there was now a connection that would last way beyond the event. I know the host will pop over every now and again, they will see each other at the shop and do more than just say ‘hi’, and our host will seek ways to try to connect her new friend to more neighbours, and more opportunities to show up. It’s what our hosts do naturally! And hopefully what our street connectors are encouraging and inspiring others to do.

The events themselves become a living example of the good life a community can give. This year more than before our hosts wanted to find ways to encourage their neighbours to get involved, create a space for conversation, a space to share food, a space for generosity, care and encouragement. Our hosts had the confidence to take hold of the events themselves (even throwing on hi-viz jackets), the creativity to find new activities, the desire to cook together, the energy to think of games to play. At our last street event it wasn’t clear when the event had started because so many people were involved, cooking, setting up, playing games, making drinks, or sitting and chatting. I just stood there thinking these events have become a community being a community together. A community that wants to invite more people to join-in, a community that wants all to flourish, and a community that knows we can’t do that without each other. 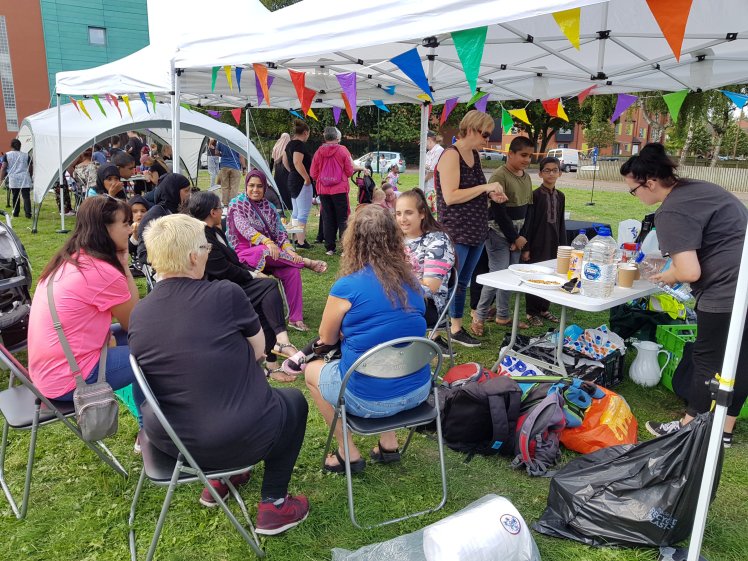 There have been a couple of extra ‘outcomes’ that have emerged from the street events, and in particular the role the hosts have played. Firstly, this year there has been an emphasis on litter picking not just after an event to clear up after ourselves, but before the event to ensure the street is clean. This I believe is going beyond just ensuring the space is clean and safe (broken glass, needles etc.) to being an expression of wanting the community to be clean and tidy. This has tied into a movement of local residents doing regular litter picking all around the community. This is a response to an increase in fly tipping, cuts to council services to clean the streets, but most importantly as a way of having pride and ownership of the community. The fact we left the space we used for the event cleaner than when we found it I thought was a fantastic outcome. Look what residents are achieving and the pride they are taking in their streets, look what we can achieve together by ourselves.

The second ‘outcome’ was spotting a stash of vehicle registration plates in a drain, whilst litter picking. This was very suspicious, with local people very wary of criminal activity taking place on the car park next to where we had the event. We reported it to the police, and as we were leaving the event 2 PCSO’s turned up to investigate. There has been a rise in crime in our area, and it was reported at a recent local meeting that the police have just 1 full-time officer for our area (previously we had upto 4). We believe it’s important that a local community has a strong relationship with the police, and the police has instigated a movement locally to put a streetwatch programme in place run by local people. At the moment we don’t know if our findings will help the police, and lead to any arrests. But it did open up for me the possibilities of local intelligence and the opportunity of an increase in neighbourliness could have on the resilience, confidence and capacity of our community to stand up to crime.

In my reflections after the event I felt these two ‘outcomes’ added an extra tier to what we might understand as the role and impact of neighbourliness. For me this asked questions about the roles and responsibilities of communities, the realms in which the ‘state’ should operate and be responsible for (what we pay our council tax for!), and the relationship between ‘state’ and ‘community’ especially in this time of austerity and cuts to services where neighbourhoods like ourselves are seeing a reduction in police, a rise in crime, a rise in fly tipping and litter. I had feelings of pride and joy with these outcomes because of what the community is achieving and doing by and for ‘themselves’. For a second I thought maybe we could create a business case for resident-led neighbourliness as a way of combating crime!? But I also felt some nervousness and unease at the direction maybe where neighbourliness could end up, how the state would value our community (as the eyes of the police, and street cleaners!) and legitimize the state stepping back and a justification for austerity (oh how we remember the Big Society!!). This particular blog isn’t intended to tackle these questions today, but definitely questions for us to ponder here in Firs and Bromford, and I imagine questions you are pondering where you are.