The Bluebell wood walk is a ½ mile trail through the top edge of Bromford from Comet Park to the Paddock. Called Bluebell woods because once a year it floods with Bluebells, which is a wonderful sight. It is a place we’ve been promoting for years but up until the past few weeks remained a hidden treasure in our neighbourhood. It is a place that if you know about it, you know and love it! People tell stories of years ago it being a place of fun, creativity and play, but recently usage of the walk has been limited to some regular dog walkers, a few local people taking a stroll, and a few students who use it to cut through to school.

We have been planning for over 12 months to have the Bluebell woods as part of a 2-mile wellbeing, heritage & arts trail around the neighbourhood with interactive arts installations and information stations along the route. This we hope will raise awareness of the walk, encourage creativity, ownership and help it again be a place of community, but something completely unexpected during this Covid-19 pandemic has caused an explosion of joy, innovation, creativity, has brought the community together during a very challenging time, and has put Bluebell woods firmly on the map.

It started on a Sunday afternoon whilst taking a family stroll up into the woods. We stumbled across a table and chairs that had been placed in a clearing in the woods. This wasn’t outdoor patio furniture, but a full dining table, 6 chairs, and decorative pillars. 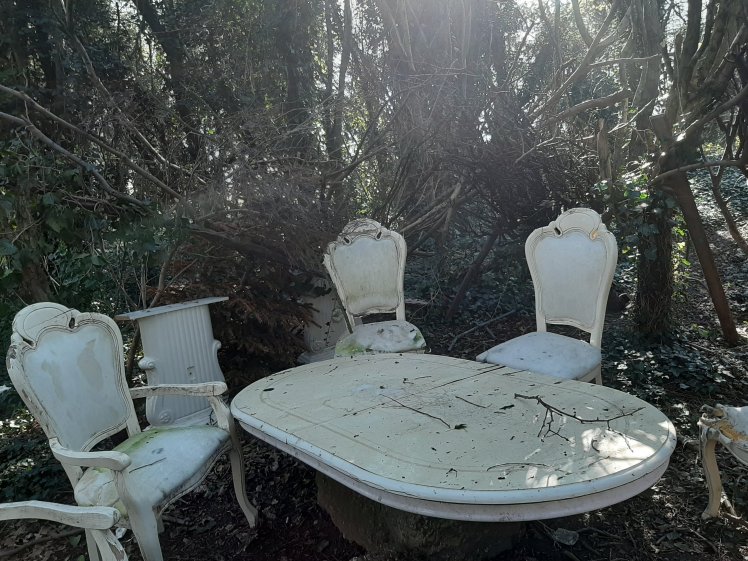 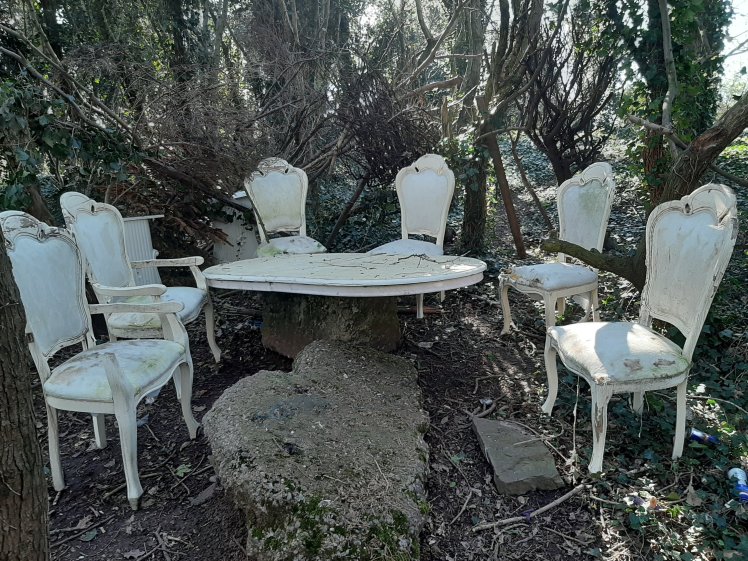 Our first reaction was to be slightly spooked, because it looked like a scary adaptation of the mad hatters tea party. What followed was genuine intrigue and amazement. Where had this come from, who’d put it there and why?

Upon our return home it was shared on our local Facebook group with the caption ‘this is possibly the most scary and creative thing I’ve ever seen’. Very quickly people wanted to know where it was, wanted to go and have a look, wanted to know where the Bluebell walk was. Within 24 hours there were more pictures being posted of walks into the woods to see the table. We did not anticipate the explosion of creativity that would follow. It started with someone placing a glass jar, paper and pens and asking people to write down what they are thankful for and placing it in the jar. Next came some artwork by children, then a candle stick holder to make the scene more elegant! Then painted stones, a light chandelier (to increase the elegance), teddies in trees, two owls, an empty bottle of wine, knives, fork’s & plates, a bird feeder, Easter decorations, and more. 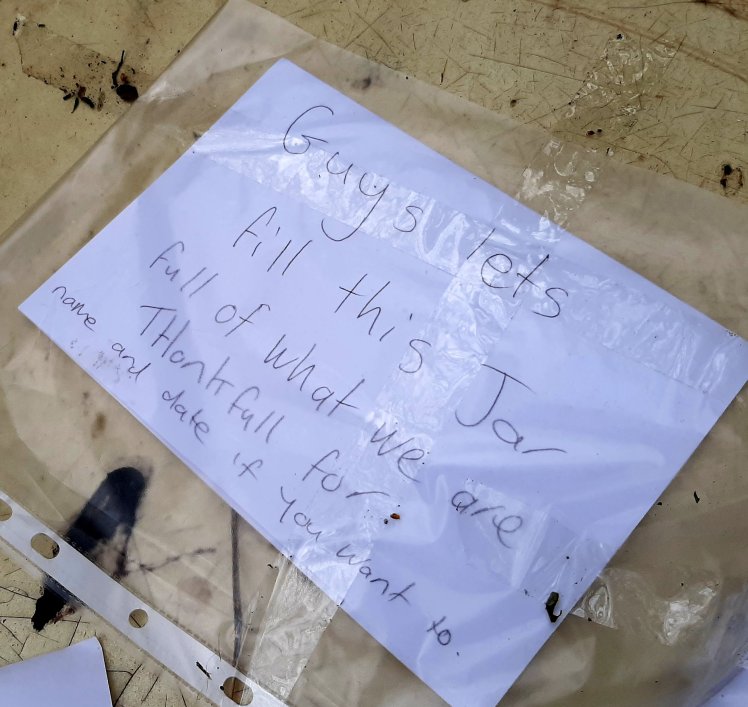 People were going there every day to see what was new or to add something creative. They also explored the rest of the Bluebell woods where there are now two new ‘home made’ rope swings to add to the enjoyment.

It became a way that we could be together, whilst being apart. By going to the table and walking through the woods it felt like you were participating in something socially together at a time when we are being asked to be physically apart. We found a way to be present in each others lives, both friends and strangers, and enjoy something together. Facebook became the place for sharing each other’s joy, intrigue and delight. It became a connection to what we have temporarily lost, and a symbol of joy, creativity, thankfulness, and hope.

It hasn’t all been positive though. As with so many things there has been a tinge of sadness. There was a report that the table had been turned upside down with some items being damaged. What we hoped was an isolated incident was followed a day later by a fire at the table, with some items being burned. The Bluebell woods is a place where fires are lit during the summer months, and it was believed that a person or group decided to intentionally damage the table. 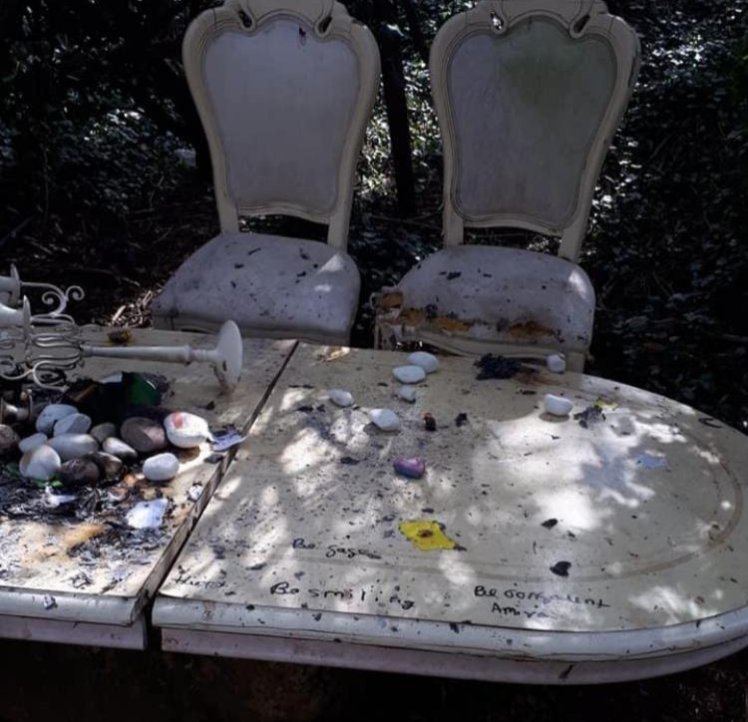 Within hours shouts of ‘we can’t have anything nice around here’ and ‘why does one ****** have to ruin it for everyone?’ flooded Facebook. People said they wouldn’t go up there again, it’s not worth it, its not safe! There was an outpouring of raw sadness, frustration, anger, and hurt. There was a real tangible feeling of loss and disappointment. Especially at a time when people are trying their best to keep going and are longing to be connected to each other. The Bluebell woods was being enjoyed by NHS staff and other key workers, parents trying to home school children, older people fearful for their health. All were enjoying this as a place of unity and fun.

But, the spirit and resilience of people awakened. There was an outpouring of passion, commitment, determination and unity. This shall not, and cannot destroy us. One neighbour said ‘We are such an awesome community that someone’s selfish behaviour isn’t gonna take away our happiness’, another ‘It is so sad that one person tried to destroy something beautiful. Today we mourn the loss, tomorrow we look for more beauty’. There was a determination to not give up! Already a new space is being created taking some of the joy of the table and resurrecting it, with an increased determination to love our neighbours, and love our neighbourhood.

To this day we don’t know where the table came from, who put it there, and why. We may never know! But it has unexpectedly become our symbol of unity, joy, resilience and hope during these challenging times, and became an opportunity for us to be #TogetherApart.